You are here: Home / Archives for Ireland reproductive rights

At the time, divorce was constitutionally prohibited. Husbands were the legal heads of their households. Ireland still outlawed contraception, not to mention abortion. In the fight for women’s rights, challenging the ban on birth control seemed a good place to begin.

The plan was for several women to cross the border to Northern Ireland, buy contraceptives in a pharmacy, and smuggle them back into Ireland. They hoped to grab headlines by allowing themselves to be caught, arrested with the contraband, and hauled off to jail.

On May 22, a small group took a train to Belfast and headed for the nearest drugstore. Born and raised Catholic, their understanding of birth control was sorely limited. When they boldly demanded coils, loops, and birth control pills, the pharmacist coolly explained that medical consultation was required for those forms of birth control. The women had to settle for condoms, creams, and jellies. They also bought lots of aspirin.

Back in Dublin, they were met by customs officials and cops. As onlookers gaped, the women waved tubes of contraceptive creams and jellies over their heads and read aloud from an article on birth control they’d clipped from a magazine. Then, for dramatic effect, they scattered what they hoped looked like birth control pills (the aspirin) on the floor. The condoms, however, they kept for themselves.

With national and international television reporters in tow, the women marched to a police station. The cops, however, played it cool and refused to arrest the women, thus minimizing headlines. Two days later, the Prime Minister assured members of parliament that the contraceptives had been confiscated and all was well.

Despite the lackluster response by authorities, the Pill Train action sparked debate, an essential tool of any nonviolent revolution.

Throughout the next decade, a number of bills concerning birth control were debated and voted on, allowing small concessions here and there. The Health Act, passed in 1985 and amended several times, went a long way toward making contraceptives available in Ireland. Censorship laws were reformed to allow mention of family planning.

The 8th Amendment to Ireland’s Constitution (1983), however, criminalized abortion, even when the pregnancy is forced by rape or incest and or when carrying the fetus to term is a threat to the woman’s mental or physical health. The only exception is for a risk (narrowly defined) to the actual life of the woman. Ireland ranks with Afghanistan, Chile, and Somalia when it comes to attitudes about a woman’s right to control her own body.

In October, 2012, Savita Halappanavar, a 31-year-old married dentist, began to miscarry due to a bacterial infection. At the University Hospital Galway, she begged for a medical abortion, but, since the fetus still had a heartbeat, she was denied one.  According to one report, an assisting doctor, when asked why they couldn’t intervene, said, “You are not dying enough.”

By the time the fetal remains were removed from her body, Savita was in septic shock. She died a few days later with her husband by her side. News spread through social media outlets. Tens of thousands mourned and protested at rallies and vigils in Ireland, England, and India.

Two years later, on October 28, 2014, while candlelight vigils were held across Ireland in Savita’s memory, a small group of pro-choice activists again boarded a train in Dublin and headed to Belfast.

They returned with “abortion pills” ordered through WoW (Women on Web), an online organization that assists women seeking safe abortions.

Participants from groups including Action for Choice and ROSA (Reproductive rights, against Oppression, Sexism & Austerity) rode the train and explained their actions to the media. In the train station, ten women swallowed some of the pills to demonstrate their safety, an act of civil disobedience. Once again, the police looked the other way.

On May 22, 2015, the Republic of Ireland became the first nation in the world to legalize same-sex marriage, not by an act of legislation, but by popular vote. It was celebrated as a remarkable shift in public opinion because homosexuality was only decriminalized in 1993. 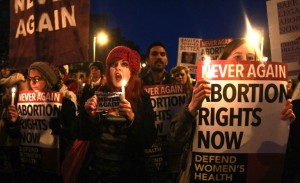 Why are LGBTQ rights, especially those which expand and strengthen the institution of marriage, winning in Ireland (and the U.S.), while women’s reproductive rights are so severely lagging?

Feminist author Katha Pollitt has some ideas. Marriage, she says, is about love, commitment, and settling down. People of all genders, classes, and sexual identities are invested in it as a right.

Reproductive rights, on the other hand, have to do with sexual activity, sexual freedom, and women’s control of their own bodies. As Pollitt explains, it’s about replacing “the image of women as chaste, self-sacrificing mothers dependent on men with that of women as independent, sexual, and maybe not so self-sacrificing.” For some, the debate pits the pure potential of fetuses against the complicated lives of grown women. Fetuses are considered innocent; women are not.

This River of Courage: Generations of Women’s Resistance and Action by Pam McAllister, New Society Publishers, 1991

“IRELAND(S): Coping with the Womb and the Border,” by Nell McCafferty in Sisterhood Is Global: The International Women’s Movement Anthology, edited by Robin Morgan, Anchor Press/ Doubleday 1984.

“The Future of Abortion Is Here — No Clinic Needed” (about Women on Web) by Allegra Kirkland, AlterNet, August 29, 2014.

“There’s a Reason Gay Marriage Is Winning, While Abortion Rights Are Losing” by Katha Pollitt, The Nation, April 22, 2015

In 1982, I edited the anthology Reweaving the Web of Life: Feminism and Nonviolence and then wrote two books about women’s use of resistance and action: You Can't Kill the Spirit and This River of Courage.

I am currently researching more examples of nonviolent action for peace and justice around the world for two new books -- one for/about children and another about women (whose actions are still so often left out or overlooked).

Here I am with Barbara Deming, my mentor and friend, in Sugarloaf Key in the early ‘80s. The photo has faded, but the memories and love have not.

Your Comments: I’m new at blogging. After I've had some time to learn how to do this, I will have a way for you to leave comments and be in dialogue with me. My Author's Guild website is at: http://pammcallisterauthor.com. Also, see my Facebook Author Page Global Nonviolence: Stories of Creative Action and My Amazon "Author Page".

Sign up to be notified of new blog posts!
STEP 1: Enter info below
STEP 2: Click on purple bar
STEP 3: Then, an email will ask you to confirm this.
~ You're all set! ~